We say the bee is hard working, generous and altruist up to her death.

Really, these are "human" considerations or appreciation that doesn't mean a thing for a bee.

(A bee while sucking the nectar from a rose). 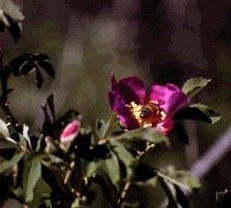 Of course, always according to our thinking, she doesn't conduct a sweet life, but she produces the sweetest of food. In fact, a worker bee lives a brief, but intense life. Everything begins with an egg long little more than 1 millimeter, deposed by the queen honeybee. After three days from the egg comes out a larva nursed by adult bees at first with royal jelly, then with pollen and honey. Only the queen, in fact always and only feed with royal jelly. After 21 days the young worker gets out of the cell and begins a life of work. 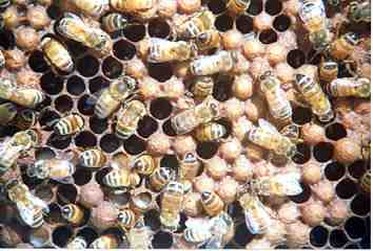 First she devote herself to the cleaning of her house. Then nurse the larvae and the queen honeybee, because the glands for the production of royal jelly are active. In succession, when the glands for the production of the wax, become active the worker bee builds cells wall of the comb. Her job goes on with the assignment as guard, ready to attack whoever threatens the beehive. Finally, in the last week of her life, the bee develops the more profitable assignment, because she change in field bee and she goes to foraging the nectar from the flowers,and during the flight of return transforms it in honey, pellets of pollen (the male reproductive cell bodies produced by the anthers of flowers) and propolis (a sticky, waxy material made from sap and other resins of tree and plant buds). In the beehive, all the stages of life of a worker bee are governed by chemical signals secretes by the queen honeybee. 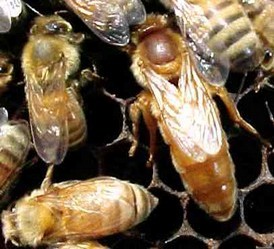 (one splendid exemplary of queen honeybee).

Except  the months from April to June, when more than one queen is raised, because it is the period of swarming, when part of the colony leave the native house to go to build a new one. The swarming has a double purpose: spread the race and to guarantee the survival, above all when the colony must resolve problems connected to any illness. But while a worker bee for all her life is forced to a total chastity, the queen honeybee doesn't have ties of this kind. In the arc of one or two days pair off with eight, twelve drones (the male honeybee). The mating happens in flight, and after the drone let go and dies. The queen honeybee returns in the beehive, where she will begin to depose thousand of fertilized eggs. Her role is vital for the survival of the entire group, according to the experts; a beehive is a living organism whose heart is the queen honeybee.

( A queen honeybee with her retinue). 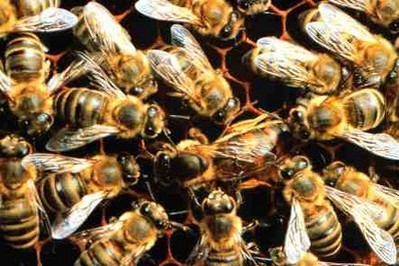 If 1000 worker bees, die nothing would happen, but if the"sovereign," she is missing the whole structure would fall like a castle of cards.

(to easily individualize the queen honeybee,  at times is applied to her a colored stamp that  could change from one year to the next). 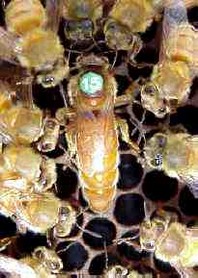 The beehive is like a living organism. In effects, in a beehive the queen honeybee governs the reproductive functions and the nervous ones, with the release of chemical substances. The whole of the worker bees represent the digestive and muscular apparatus of this organism. The drones, on the other hand represent  the reproductive function and vigilance function, because they warn the colony in case of danger and also contribute to maintain the proper temperature. In a beehive, in fact, the thermometer oscillates in a minute way. And when it is too hot, the bees shake their wings to create current of air. Manoeuvre that also serves to reduce the amount of dampness from cells full of honey, before sealing them with beeswax.

The bee mellifera is the  most evolved insect that exists.
Just think about the ritual followed by a field bee when she return to her beehive after having found a font of water or flowers reach of nectar. The discovery is reported to the others bees with chemical messages (the bees have a very acute sense of smell) and with visual signals, that is with particular dances. The whole of these information are useful to communicate in which direction is the water or the nectar and at which distance. This are fundamental information, considering that a bee she move away from the beehive 2 or 3 kilometers in average. But this distance can also reach 17 kilometers, a total of 34 kilometers with the return journey. The state of health of a swarm in this small, and big area could give interesting indications about the environment: in fact, the bees are the most used types of insects for this purpose. For example, to find out if the area is polluted,  it's enough  to examine the honey: the one from a city area, just to quote the more obvious case, it will contain surely carbon residual. But also the country area at times presents some problems: could happen that, where there is excessive use of chemical substances in agriculture, a colony of bees  from that area could show a deterioration apparently incomprehensible. If we like to monitor a particular area, there is the advantage that a beehive is transferable and that the colony is able to patrol from 400 to 3600 hectares. The same result would be impossible with mosquitoes and flies, not transportable, they are also an efficient biological indicators: the presence or the absence of mosquitoes tells if a environment is more or less unhealthy; few or so much flies signal instead that there is few or so much organic substance in decomposition.

For thousand of years man had to deal with bees, because they produce honey, pollen, propolis and royal jelly.
To keep honeybees it is not a simple thing, but not even too complicated.

In an beehive live 60 thousand and more bees and some days they sting 15 or 20 times the apiarist. If  you like the challenge, you should put on account that punctures are inevitable with breeding bees. Nothing serious, except for whoever is allergic. Only in this case the puncture of a bee could create problems, also if generally it is sufficient a antihistaminic. Sometimes, however, it could be an exaggerated reaction  by the organism, that could stops vital functions like respiration (anaphylactic shock): in this case to avoid serious consequences is very important to seek medical attention.

(A wasp. Only an inexperienced could confuse it with a bee)
But if the bees could represent a danger for somebody, also they are not exempt from insidious aggressors. The greatest threat, however, doesn't come from pollution . The biggest and fierce  enemy is the "varroa mite", that takes home in the beehives;  we have been able to keep under control, but don't defeat it. It appeared in Italy in 1981, and since then strikes adult honey bees and also larvae. Despite this, the honey bee continues to give us her products and she contributes in a determinant way to the pollination of plants. When she suck the nectar of a flower, each insect unconsciously picks up part of the pollen that then transports and deposits on other flowers. We  shouldn't forget that the main product of the bees, is honey, and is very good. We have learned to taste it in a professional manner , like it already happens with wine: we are speaking about the rite of the sensorial analysis. First the color is appraised, then the scent and finally the taste of honey. Then you clean your mouth with some water or one piece of green apple and you can proceed to taste the subsequent honey. All of this happens under the guide of experienced  instructors during dedicated courses (organized also by our Apiary), where you can learn to distinguish a type of honey from another type, to understand values and defects. 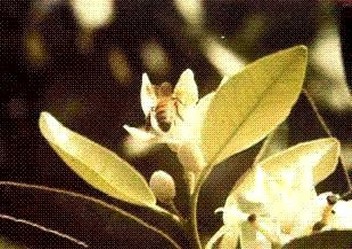