The Return of the Monks to Finalpia
CENTENARY OF THE RETURN OF THE MONKS
22 November 1905-2005
The first photographic documentation of the Monks returned to Finalpia,
with the first Seminarists, Priests and some friends (years 1907/8) 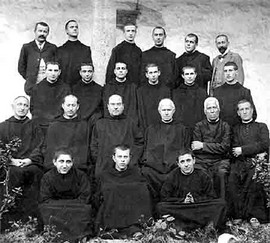 The interest in recovering the historical memory doesn't constitute an assignment for the experts only of such searches but, also in different forms, is a commitment for any category of people that want to recover the whole importance of their own existence in totality. All the more reason when refers to institutions and to places close in space, in time and in spiritual bonds to the existence of each, in this case, the Abbey of S. Maria of Finalpia.

This Abbey, in fact, founded by the Benedictines monks (Olivetans) in 1476 and abandoned by them after the Napoleonic time; this year we celebrate the centennial of the opening (22 November 1905) by the Benedictines monks of the sublacense congregation founded by Abbot Pier Francesco Casaretto. The same monks, actually where present since they own origin- half of the XIX century- but, because of the adverse political conditions, they could install themselves permanently only at the beginnings of the XX century. They originated from the flourishing abbey of S. Giuliano in Genoa and they were lead by who would be the first abbot of the revived community, Dom Abbot Bonifacio Bolognani (+1931), that has left a deep memory among the population.

The link between the attempts of revival at mid nineteenth century and the actual return of the monks was Dom Urban Gerini (+1928) that in the preceding decades had care of the parish.

One the various merits of Abbot Bolognani was also the foundation, in 1914, of "Rivista Liturgica" (Liturgical Magazine), the first of the kind in Italy, the second in Europe. By means of such periodic and the initiatives that would have placed side by side it, the risen Benedictine community of Finalpia became effectively part of the dawning Italian liturgical movement turning into one of the more qualified channels.

The returns of the community demanded however to proceeded to a completion of the claustral buildings interrupted under the preceding community (Olivetans). Author of this enterprise was Dom Leandro Montini (+1958), architect, sculptor, painter, inlaid man, that, in very difficult circumstances due to the second world war, succeeded very well in this enterprise. To his pictorial work is due also the suggestive decoration of the monastery chapel. Under the successors of Abbot Bolognani , Dom Germano Lustrissimi, Abbot Bernardo Cignitti, Abbot Salvatore Marsili , Abbot Placido Colabattista, up to the present Abbot Romano Cecolin- the work kept on going, culminating, this year, in the setup of the new library.

The occupation of the monks, beyond the care of the Parish, has concerned the field of craftsmanship , with special commitment to the apiary, the school for the young monks including courses of philosophy and theology, the teaching in diocesans seminars and at the Pontifical Athenaeum S. Anselmo in Rome, international university of the Benedictine Order

Regarding individual monks, we want to mention at list the one who vivid memory has been kept by many who knew him, Dom Adriano Novelli (+1974), esteemed and appreciated by all for his deep-rooted religious spirit.

Inauguration of the new Library

Well known is the importance of a library for a Benedictine monastery. In the Rules itself there is a provision for a "bibliotheca"(library) from where the monks could withdraw the books for the "lectio" (Divine Office) and the history tell us the importance of the libraries and of the monastic"scriptoria" (copy room) that have allowed to preserve also the classical patrimony.

The old library that the Olivetans had constituted in the period of their stay in Finalpia has suffered of the circumstances due to the Napoleonic suppression and to the absence of the monks.

This nucleus- immediately enriched by the donations, reported in the Chronicle of the Monastery, by Lawyer Paolo Accame of Pietra Ligure (25 February 1908), of the parish priest of Spotorno Fr. Valentino Cogno (11 April 1908) and from the acquisition of the library of the late Mr. Leone Pierattini of Finalmarina (1 April 1909)- it is found in what it is the actual Chapel , where the election of the first Abbot of Finalpia happened, Dom Bonifacio Bolognani (13 October 1909).

With the construction of the new Chapel, work of Dom Leandro Montini, the books transmigrate in some rooms at the end of the Corridor of the Silence, until in early 1950 an ample center is built on the west side of the second Cloister. During this period, we note a growth of the bibliographical patrimony (above all with prestigious and essential patristic series), a proper setup and cataloguing.

Recently it has been created a new center to put together precious and selected material of many Fathers (especially Marsili, Penco, Tomati), catalog them in modern manner and put them also to disposal of the public.

To today the book patrimony is over 40,000 volumes and includes some manuscripts, various incunabulum, 179 sixteen century books, and a big selection of texts of the seventeen and eighteen centuries. The up to dateness is taken care by individual monk in their own specialty: the acquisition and completion of theological, biblical and patristic series, and the subscription to more than one hundred magazines.