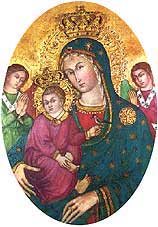 Reporting some interesting historical information - on  the Icon of the Madonna di Pia - written by the well-documented historian P. Guglielmo Salvi O.S.B., in the first half of the last century.
UNTIL a few years ago the beautiful icon of our Sanctuary was immersed, about the origin, in the deepest mystery. Unknown the author, not even the century in which it was painted was agreed among art critics; and others had it reassembled in the 15th century, others in the 14th century. However, the idea of ​​attributing it to Fra 'Barnaba da Modena prevailed, as the Madonna who is venerated in the church of San Donato in Genoa was attributed to him. In fact, between the two paintings there are such evident similarities that they are believed to be painted by the same hand. They are both slender and shaped like a Gothic arch, with gilded relief, ornamental arches in the upper part. The two Madonnas arranged in the same way, holding the Child with the right hand; their faces, with their small mouths and sharp noses and almond-shaped eyes, in a serious attitude; the left hand with the ring in the middle finger; the folds of the clothes and the line of the hems, with the star on the left shoulder: everything speaks to us of an identical inspiration, under whose influence they were worked. And the particularities. of the Child, with squat shapes in both paintings, with curly hair, with a necklace around his neck, from which hangs a coral habit; holding his left foot with his right hand, they repeat the same thing to us. Even the variants are so naïve as to confirm the artist's effort not to repeat themselves. The Child of the church of S. Donato has in his left hand a folder with the inscription: come ad me omnes qui laboratis et ego reficiam vos; that of Finalpia has a multicolored bird; the first has a tunic quilted with stylized stars, while the Madonna has a single-colored mantle; the second, on the other hand, has a single-colored tunic and the Madonna a mantle covered with stars. The painting of Finalpia places on the sides of the Madonna two adoring angels, of which the painting of S. Donato is missing: but at the bottom of the table there is room for inscriptions that had to pass on to posterity the name of the author and in our case also that of the donor. It was this a circumstance that dispelled the error of attributing the Madonna of S. Donato to Barnaba da Modena. "The author's name: nicolaus de vulturo pin., Hidden for many years under a sort of seventeenth-century frame, was discovered by my illustrious friend, Prof. Cav. Giovanni Campora.
Having discovered the true author of the Madonna di S. Donato, the question of the artist who had painted the Madonna of Finalpia had to come backt; and in fact, immediately after Prof. Adolfo Venturi, according to the testimony of Silla, gave the paternity to Nicolò da Voltri (1). It is certain that Nicolò had an affair with the Finalesi: this can be inferred from an act signed in Genoa on June 5, 1395, to which acts as a witness (2). Perhaps in Genoa he also met the one who commissioned the icon for the church of Pia.
At the bottom of the painting of the Madonna di Pia, a writing, which reappeared more clearly after the restoration, says: Antonius basheria. This name occurs several times in contemporary documents, he appears in 1389 among the sailors embarked on a Genoese ship with other Pia's men: "Antonius" boscheria de finario "filius Raffi habitator" apud sanctam Mariam "de Pia (3)." In 1410-1411 on the ships there is his son, Donato, whom Antonius pater suus guarantees for boarding (4). He is also mentioned in a deposition of texts collected by the notary Finarino Schianello (5).
In Pia he owned a land in posse Finarii ubi dicitur Io Morim, sold to Vincenzo de Campis de Finario, before 11 December 1427 (6), mentioned once again as guarantor of the sailor Antinorio de Finario in 1442 (7), in 1449 he was already dead because he does not appear among the men who swear allegiance to the Republic of Genoa, after the defeat of Galeotto I del Carretto.
The painting donated by Antonio Baschiera certainly does not mark the beginning of Marial devotion.
The title of the parish itself traces it back to more remote times. The finding then in the ancient church the painting of "Our Lady, with other Saints" and "an ancona in which Our Lady with a ship remains painted" (8), tells us how it was established by means of the sailors, to whom it confirms the gift of 9 silver whistles,

used on ships and that of 9 silver collars (9), with which the slaves taken by the Saracens on the sea were tied, as well as the new news of the painting offered at the end of 1300 by Antonio Baschiera. 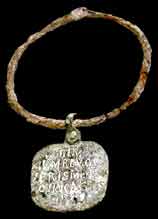