Go to content
The
MADONNA DI PIA
comes from the sea
We are used to  our comfortable paved roads that lead us to many places in our Liguria  but, until just over a century ago, things were not so. 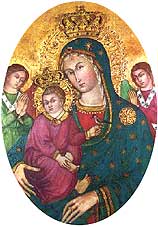 The ancient AURELIA road ends in Vado, near Savona.
The  Roman Empire took care of the road only on the mountains behind the  coast, for the transit of its military contingents, the coastal areas  routinely used boats for ordinary trips, because the terrestrial transit  routes were very uncomfortable.
After the Roman  Empire - until the unification of Italy and the construction of the  railway (in the second half of 1800) - the chronicles tell us about  ships that stopped near the coast, to allow the crew to reach land on  boats, to come and dissolve a vow to the Madonna di Pia, after having saved from a shipwreck or some great danger.
We know that - besides Clemente VII - at least two other Popes came to the feet of the Madonna di Pia.
Innocent IV (former bishop of Albenga) arrived there in a litter, while crossing Liguria, returning from Lyon to Rome, in 1251.
Also the successor of Clement VII himself, the almost ninety-year-old Paul III arrived there in 1538.
We report a suggestive chronicle of the visit of Pope Clement VII, who was nephew of the famous Lorenzo the Magnificent (+1492).
In  1533, when he had to go to Marseilles from Rome, for the marriage of his  great-granddaughter, Catherine de Medici, with the duke of Orleans, son of  Francis I, king of France, and for other important Church affairs, he  decided to seize that propitious occasion, to venerate the Blessed Virgin of Pia. 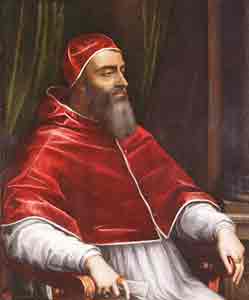 Seven powerful fleets were deployed in the port of Pisa, the Imperial fleet, the French, the Pontifical; two of Spain, and that of the Knights of Rhodes, all waiting for the Supreme Pontiff. (On the right, Clement VII in the portrait of Sebastiano del Piombo)
He moved from Rome on September 9th to Pisa, accompanied by ten cardinals, by many prelates, and by his numerous court. Upon  his arrival in Pisa, embarked on the flagship of France, he gave the  signal of the parade of the numerous galleys and for departure.
At  dawn on October 6, finding the fleets in front of the Finale, the Pope  ordered that all entered the bay, longing to take land, to go and  venerate the miraculous effigy of Maria Pia, of whom he had heard many  extraordinary  prodigies, operated for those who trusted her with recourse.
At the  appearance of many paved galleys, at the beach, the Carretteschi (the  subjects of the Marquis Del Carretto) with all the inhabitants, poured  out on the marina, eager to know the reason for such an unusual  spectacle. Hearing that it was the Supreme Pontiff who went there to visit Maria Pia, they proved unspeakable.
Landed, the Pope with his noble court and the general  staff of the fleets, they soon set off for the Shrine, accompanied by  the Del Carretto family, by the clergy and by the people among songs and  ovations. 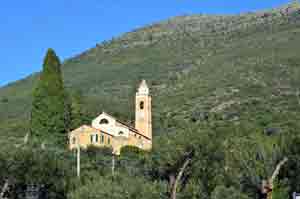 To  welcome the Supreme Pontiff there was  the then  Prior of the Olivetan Monks of the Monastery of Finalpia, Fra Angelo di  Albenga.
Born in Salea, hamlet of  Albenga (c. 1487), he had entered the Olivetans in Finalpia, he  had taken the Olivetan dress (March 21, 1502), to become a monk the  following year.
He became a priest March 21, 1511, he was elected Prior to Finalpia 3 times (1518-23, 1525-27, 1532-34).
In the meantime (according to the use of time) was also nominated Abbot General of the Olivetans (1530), pro tempore,
In 1533 he must therefore have been about 45 years old.
It would then become, in two years, the First Abbot of Finalpia.
When  Clement VII arrived at the foot of the venerable effigy of the Virgin  Mother, he prayed it a long time and with great fervor, to obtain from  the divine Son, a prosperous and happy outcome to the enterprises he had  by hand; and the like made his following.
But let's leave aside the ancient chronicles and come to our days.
This year, on August 14th 2018, an effigy of the Madonna Pia will arrive from the sea.
We  are grateful to the generous and professional service of the COMPANY OF  SAN PIETRO DI FINALMARINA,  for the first time - in the many  centuries of its history - an effigy of MADONNA DI PIA will arrive to us  from the sea, right on a boat with its 4 good  oarsmen.
The departure from the Port of Finale will take place at 20.30.
All the way will be accompanied by canoes and boats from the LEGA NAVALE DI FINALE.
The arrival of the maritime procession on the beach of Finalpia is scheduled around 21.00.
Back to content