Thousands of Filipino workers at sea and at risk
By BILL SIZEMORE, The Virginian-Pilot
© April 17, 2004 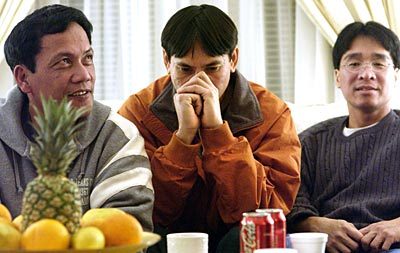 Ramon Ronquillo has been a seafarer for 25 years. But when he returns home to his native Philippines, he plans to find another line of work. “I cannot go back,” he said last week. “I have promised myself. I will get a job on land – a small business, maybe.” Ronquillo was a seaman aboard the Bow Mariner, the 570-foot commercial tanker that exploded and sank Feb. 28 in the frigid Atlantic Ocean off Virginia’s Eastern Shore. Of the ship’s 27-man crew, only he and five others survived.

The near-death experience was enough to convince Ronquillo, 48, that he should quit one of the world’s highest-risk occupations, even though that decision will almost certainly mean a lower standard of living for him, his wife and their three children. Filipinos have taken to the sea in huge numbers during the past 25 years, making their island nation the leading supplier of seafarers in the world. They do it because they are able to earn wages that, while modest by U.S. standards, are far above what they could ever earn at home. But, critics say, they do it at the risk of exploitation, mistreatment, injury and death.

The cause of the Bow Mariner tragedy is unknown, and no one has publicly accused the ship’s owners, managers or crew of negligence. The four survivors who were still in Hampton Roads last week had nothing but good things to say about their employers. “It’s a good company,” said Lugen Ortilano, 32, the 3rd officer. He has worked for Odfjell Seachem, the Norwegian owner of the Bow Mariner, since he began his seafaring career nine years ago. Ortilano, who is married with no children, said his wife would prefer that he find a job on land. “But I said to my wife, 'I have to go back. I want to become a captain.’” The money he earns at sea is too good to give up, Ortilano said: His $1,853 monthly salary is five times what he could earn in the Philippines. And because it is earned offshore, under Philippine law, the money is tax-free. As for the risks of seafaring, Ortilano shrugged. The potential for disaster is part of the job, he said, much like the risks of military service. “Ships sink. It happens,” he said. “It’s normal.”

The shipping industry has become one of the world’s first truly globalized industries. Along the way, it has generated the same kinds of pressures, debates and fears that have characterized other expanding sectors, from toys to textiles. There is almost no better example of globalization than the Bow Mariner. It was owned by Norwegians, managed by Greeks, flagged in Singapore and crewed by Filipinos. Overbuilding of commercial ships in the 1970s and ’80s led to depressed freight rates and downward pressure on labor costs – basically, a case of too many ships chasing after shrinking profits. One of the most effective ways of cutting costs, shippers found, was hiring seafarers who were willing to work for less money.

“It’s much more competitive today than ever before,” said J.J. “Jeff” Keever, executive vice president of the Hampton Roads Maritime Association. “There’s been a tremendous shift to crew members from less developed nations.” For the past two decades, the biggest beneficiary of this trend has been the Philippines, a developing country with a seafaring history and one of the highest unemployment rates in Asia. Today, more than one in four of the world’s 1.2 million seafarers are Filipino, according to the Seafarers International Research Centre at Cardiff University in Wales. No other nation comes close.

“The No. 1 export of the Philippines is its people,” said Ron Villanueva, a Filipino-American who serves on the Virginia Beach City Council. “Filipinos are renowned for their hard work and resourcefulness. They’ll seek employment anywhere they can find it.” Hampton Roads has one of the largest Filipino populations in the United States, due in large part to military connections dating from U.S. occupation of the Philippines in the first half of the 20th century.

The Philippines has more than 400 crewing agencies, companies that recruit and place seafarers on ships. Manila has been called the “crewing capital of the world.” Job seekers travel to Manila by air or ferry, often from islands hundreds of miles away, and gather by the hundreds in open-air labor markets. For many, the job search takes months. And for some, finding a job only brings more misery.

The International Commission on Shipping, an independent group chaired by a former Australian transport minister, held hearings around the world and issued a blistering report in 2001, alleging widespread abuse of seafarers. In a conclusion that was denounced by the shipping industry as inflammatory, the commission declared: “For thousands of today’s international seafarers, life at sea is modern slavery, and their workplace is a slave ship.” The group estimated that 10 percent to 15 percent, or perhaps as many 20 percent, of the world’s commercial ships are operated under substandard conditions. It said seafarers suffer beatings, inadequate medical treatment, poor accommodations, insufficient food and nonpayment of wages. Even on the best-run ships, the commission found, crews suffer isolation from their families – nine-month voyages are not uncommon – remoteness, minimal rest and recreation, and fatigue. Many of the most bitter complaints came from the Philippines, where some crewing agencies were accused of charging illegal “placement fees” of up to $2,000 to place seafarers on ships and said to be circulating blacklists of “undesirable” seafarers who complained about shipboard conditions or engaged in union activity.

Seafarers also face risks from modern-day piracy. The International Chamber of Commerce reported that pirate attacks worldwide increased in frequency and violence last year, with a total of 445 incidents reported.

A typical entry in the chamber’s weekly piracy report, describing an incident last Sunday off Taganak Island in the Philippines, read: “A group of 8-10 pirates in black uniforms and armed with M16 rifles and grenade launchers boarded a tug towing a barge. They destroyed radio equipment and stole tug’s property. They took master and two crewmembers as hostage and 40 minutes later fled in a speedboat towards islands in southern Philippines.”

A new worry for Filipino seafarers is competition from countries like China, Russia and India as shippers seek even cheaper labor sources – a “race to the bottom,” some critics have called it. A comparison of wages by two Cardiff University researchers last year found that the average Filipino seaman earned $1,001 a month – about 12 times the Philippines’ average per capita income. The average Chinese seaman was paid $611, nearly 40 percent less than the average Filipino.

A recent survey by two Filipino crewing groups found that 80 percent of their member agencies had lost jobs to other Asian, East European and Chinese competitors over the past two years. This loss of competitive edge, coupled with a global glut of seafarers, has created a situation where Filipinos and other international seafarers are increasingly vulnerable to exploitation, according to the International Labor Organization. Moreover, the continuing influx of low-paid labor has produced crews that are inexperienced and inadequately trained, critics say , making accidents more likely.

The increasing international competition for labor has prompted a critical look at the quality of maritime training in the Philippines. The Cardiff researchers reported a wide range of quality, from state-of-the-art labs and equipment in some institutions to “very poor” facilities in others. Competitive pressures have prompted shippers to cut back on the size of crews, leading to longer hours and a wider variety of tasks, which also can contribute to accidents. There is a widely quoted statistic in maritime circles, although its origin and documentation seem to have become lost in the mists of time: Four out of five shipping accidents are attributable to human error.

Gerhardt Muller, a professor of intermodal transportation at the U.S. Merchant Marine Academy in Kings Point, N.Y., said he believes shippers ignore the personnel issues inherent in a globalized work force at their peril. “Seafaring used to be a profession that had a certain romance to it,” he said. “That’s gone. What we have now is a sense that it’s a job. Companies look at it strictly as a bottom-line operation.

“The business concepts and the technologies are moving so fast that we’ve sort of left the human element in the dust. And the long-run consequence of this is that if we don’t recognize the human issue, we’re going to see more and more of these accidents.”

There are no comprehensive worldwide statistics on shipwrecks or crew fatalities. Incomplete data collected by the Cardiff research center indicate that on average, more than 2,000 seafarers die at sea each year. There were 128 tanker accidents in 2003, according to Intertanko, an association of ship owners. Most serious in terms of human casualties were five explosions that resulted in 13 fatalities. Odfjell says it is determined to find out what caused the Bow Mariner disaster. But four of the six surviving crewmen, acting on the advice of lawyers hired by the ship’s managers, have refused to speak to the Coast Guard, the agency responsible for investigating the accident.

The men did agree to testify before a federal grand jury after being subpoenaed. They say they have been unable to shed any light on the cause of the accident because they were not in the immediate vicinity of the explosion.

After 19 years at sea, Edimar Aguilar, 48, signed on with Odfjell in January, joining the ill-fated Bow Mariner voyage as 2nd engineer. He said the company offered better pay and working conditions than his previous employer. He said he chooses not to dwell on the dangers of his profession. When he gets home, he said, he will take a three-month maritime safety refresher course to keep his working papers current. “Then I will go back to sea,” he said. “This is my life.”