Leghorn will light a« Stella Maris» for seafarers

The life at sea is more and more difficult, as the dramatic reality of suicide reveals.

And the Tuscany diocese is mobilized

In the last months the media has emphasized news of suicides of seafarers on board merchant ships arrived in the port of Leghorn. To be exact three the ascertained cases, while there are strong suspects for other two bodies found at sea.

Beyond the crime news; it become more urgent the need of a pastoral for the sea that take care of those people that live and work on board ships, often in physical and psychological particularly difficult conditions.

The diocese of Leghorn through the initiative of Fr. Belloni Angelo, chaplain of the Apostleship of the Sea, he is trying to create a real pastoral of the sea, as it already happens in other reality. « Go at sea like a seafarer, Fr. Angelo says, to know this reality better he embarked for few months- it means suffer deepest uneasiness of the migrant; it means spending years of your own existence, often those of youth, in an unnatural environment, separate from dry land, far from affections, inside a very narrow group 15 - 20 people- only kept together by the irons rules of board life and by the professional knowledge. The separation for months and years from own country, from the local community and from the family deprived the seafarer of the sense of belonging and cause anxiety also for the fear to lose the own family and friends forever».

« The problem of the affective loneliness for the seafarer- continue the priest- is one of the principal problem and it could start other psychological problems with effect boomerang. To the loneliness and the distance from the family is tied up the use of alcohol and drugs, sexual disorder and illegal activities are illusion of an easy escape from family problems».

All that- reflects Fr. Belloni - is to be considered with the general tendency of modernization of ships and reducing the minimum number of crews, composed accordingly by dozen of men often of different culture, language, nationality and different religion, with insuperable difficulty to communicate and create friendship:«not much attention is given to maintain the ethnic-cultural compactness of the crew, this produce a fragmentation of the national groups that increases the sense of frustration and of isolation of the seafarer».

To these are added so many other problems« tied up to the reduction of the safety standards and to the aging of ships with consequent increase of wrecks and sinking as well the number of dead at sea- the priest testifies-. Other problems tied up to the lacks of medical assistance and insurance and union assistance add to other worries of the people of sea to make their life very hard».

To meets to the demands of many seafarers that come ashore just for few hours while their ships are in port in Italy and other ports of the world, a structure of reception and assistance denominates Stella Maris or Seaman Club also known « home away from home» has been created; animated by the local Churches Catholics and Evangelical and with the help of volunteers.

Seamen Club Centers usually are located in proximity of the port to be easily accessible by the seafarers, they offer a series of services like the Internet-cafe, an agency for remittance of money, an ethnic cafeteria, a small dormitory, a telephone service at accessible cost, also consultants for social, medical, legal and industrial problems are provided.

And while the search for a location is under way in all earnest to make ready these services, beginning from the next September Fr. Angelo will meet the priests of the diocese of Leghorn to illustrate the plan for a Stella Maris and to involve the single community in the initiative. 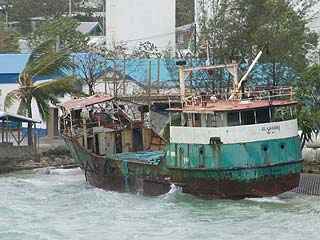 Not always sailors travel on the last models of cargo ship or cruise ship!

A newsletter sent all over the world

The name« Seafarer's News» the newsletter sponsored by the national Office for the pastoral of the workers of the sea and of the air of the Foundation Cei Migrantes in collaboration with the associations« Stella Maris». The subscription is free:just register through the Internet: www.aposmar.net , click on Seafarer's News and follow the instructions. The newsletter, will be published in different languages and editions (India, Philippine, Russia-Ukraine) three times weekly] (Monday, Wednesday, Friday) and it will offer, national news, information and contents of pastoral and spiritual character. Each edition can be printed and diffused between the sailors. « It is a pastoral service for the workers of the sea- explains Fr. Giacomo Martino, national director of the Apostleship of the Sea- and not only: it will be useful to keep them informed on what happens in the world and to make them feel part of a family; it is a new tool to approach all those people that lives for whole months in "open sea" deprived of information». The need of a newsletter became apparent after the tsunami of December 2004: in that occasion many seafarers of the stricken zone learned what happened in their countries only in February, weeks after the tragedy. The pastoral for the seafarers "invests" more and more the mass media, as confirm the recent presentation of the new web site  www.aposmar.net and the quarterly periodical Stella Maris.

Freely translated from an article in “Avvenire” 5 July 2005