Go to content
TWO POPE DE 'MEDICI
The Medici of  Florence were a rich family of merchants from Florence who had started a  profession of bankers. The power of money had led them to become one of  the most influential and cultured Lordships of the Renaissance in Italy. 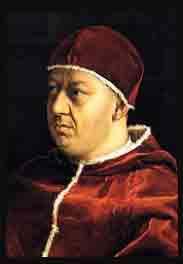 This family of bankers and patrons rose even more to the fore when the son of Lorenzo de Medici (the Magnificent) became Pope, with the name of Leo X.
This Pontiff had to juggle two European contenders Charles V of Habsburg (king of Spain and Emperor of the Holy Roman Empire) and Francis I of Valois, king of France.
Leo X had seen the Protestant avalanche spill over all of Germany, almost destroying Catholicism and believed that this disaster was also due to an insufficient commitment by Charles V.
In France, on the other hand, the religious policy of Francis I had contained the Protestant currents (particularly the Huguenots).
This had attracted the attention of the Supreme Pontiff towards France and the sympathy towards his king who, like the Medici of Florence, was a great patron.
The  interest was mutual (even if the relative contents were different),  because Francis I would have liked to extend towards Italy and tried to  have some foothold in our peninsula, but this intent of the French king  would not have been shared by the Pope at all. .
This first attempt at an understanding did not go well.
When then Giulio de 'Medici, first cousin of Leo X, became Pope in 1523 taking the name of Clement VII,  he too ended up following the political orientations of his family  towards France, rather than towards the Empire of Charles V.
Charles V found this choice so unfair that he allowed (rather than ordered) the infamous Sack of Rome
of the Lanzichenecchi in 1527. 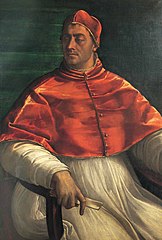 Meanwhile,  Francis I's policy of expansion in Italy had been shattered in the  disastrous battle of Pavia, where he himself had fallen prisoner.
However,  this king of France had already offered the Pope that his second son  Henry, Duke of Orleans, would marry Catherine de 'Medici, the only heir  to the Medici fortune.
Clement VII had accepted.
The  Medici family would have had the honor of mixing their own blood of  patrons and bankers with that of the high French aristocracy.
During the journey from Rome to Marseille, where he was going for the wedding of Catherine de 'Medici to Henry of Valois, Clement VII found the opportunity to pay a devoted visit to our Sanctuary on 6 October 1533.

Instead, Catherine de 'Medici ended up  becoming not only Queen of France but Queen mother of 3 kings of the  Valois dynasty: Francis II, Charles IX and Henry III.
Meanwhile,  in Finalpia  remained the memory of this noble Pontiff, who had also  deigned to stay in our monastery, granting audience to local notables  and considerable spiritual privileges (indulgences) to the faithful.
In recent weeks we have talked about some reasons that may have led Charles V and Clement VII to come on a devoted visit to our small Sanctuary of the Madonna of Pia, just 15 m. of length. 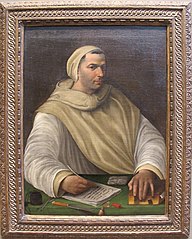 At that time, the honors of the house were always done by the same Prior Olivetano Fra 'Angelo of Albenga, who was at home here because he had entered in Finalpia and had dressed the Olivetan habit (1502) and here he had become a monk (1503).
After having continued his studies in Monte Oliveto Maggiore (SI) and having become a priest (21 March 1511) he had returned, several times, to Finalpia as Prior.
In 1530 he had also been elected Abbot General of the Olivetans, only to return (according to the Olivetan Constitutions) as a simple Prior to our monastery. In this capacity he had therefore welcomed both Charles V (1525) and Clement VII (1533).