Go to content
THE SECOND ENTRANCE
Let's resume the discussion on some  characteristics of our Abbey, suspended on the 15th Sunday "per annum"  of 10 July 2022. At that time we set out to start talking about what was  for many centuries the main entrance of our Abbey,
as we can see it today, here on the left. 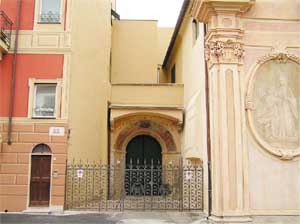 We understand that in the early days the Olivetan monks preferred to go to
spend the night in some houses on the Monte, near the Chapel of S. Antonio.
The  parish of Finalpia and the annexed Hospitium (a modest shelter for some  sick, elderly, pilgrims or even vagabonds) could not guarantee a  peaceful sleep for monks in full activity. In fact, the church and the  annexed rooms overlooked directly  on the  beach and in the Ligurian Sea, where Saracen ships also crossed. These  used to send a small team with a lifeboat that, with the favor of  darkness, tried to capture someone, and then ask for a ransom - or to  sell (more hastily) on the slave market of the nearby African coast.
It was only Napoleon who eliminated the  Saracen pirates from the Mediterranean, who had raged there for  centuries (with the probable complicity of some senior European  officials of the Ancien Regime). 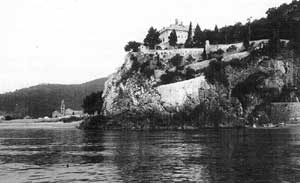 But  let's go back to our Olivetan monks who had arrived in the church of  Finalpia, elevated to a parish on 21 September 1476 with the papal bull  of Sisto IV Decorem domus Dei, preserved in the parish archive of  Finalmarina.
But let's go back to our Olivetan Monks.
It appears that a group of these monks had already arrived in Finalpia in 1477, just one year after the publication of the Bull of foundation of Sixtus IV (21/09/1476).
But not even a papal bull was a magic wand that could cancel existing rights-duties.
It  was therefore the task of the local authorities (ecclesiastical and  civil) to ensure that the Bull became executive without affecting the  existing rights and obligations and that it was provided for or, at  least, agreed to appropriate compensations.
However, the new community of monks, which  legally became the new owner of the parish of Finalpia, was also  entitled to a roof that would welcome them and allow them to lead a  normal monastic life. 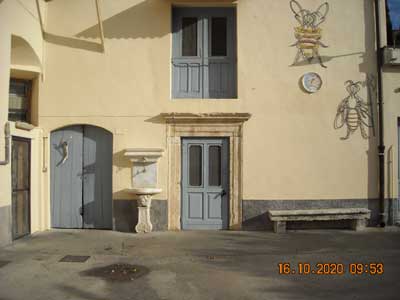 But the only rooms of the Parish, which could  become immediately available, were only those of the Hospitale  (which stood roughly where the current Apiary is now). And there the  first monks had to temporarily settle down pending the construction of  an adequate monastery.
The new small monastic family immediately began to exercise the parish office and anticipating the provisions of the Council of Trent (1545-1563), it also began to keep a register of baptisms from 1481 (still preserved).
But who were these newly arrived monks?
We read their names: Fra Raffaele da Milano Prior, Fra Giovanni del Finale Vicario and Cellerario, Fra Lorenzo del Finale Master of novices, Fra Antonio Ballasina Conventuale, Fra Luigi da Milano Sacristano and Fra Benigno da Onelia Coadjutor (data taken from the Familiarum Tabulae ad annum 1478). 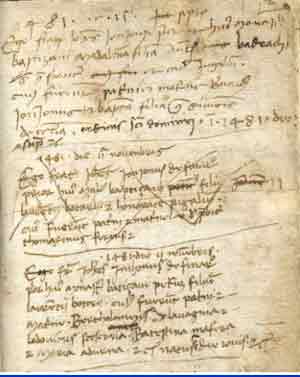 How many fires (families) was the parish of Finalpia composed of?
Looking at the book of baptisms 1481-1592 it appears that the births of the parish were on average about fifteen a year.
More interesting are the names of the so-called families (surnames): in about thirty years they are about fifty.
It also happened that there were surnames that did not constitute a single fire, but as many as 5 different families.
The monastic family therefore had lot to do
- daily liturgical prayer
- assistance to pilgrims
- education of local youth in the art of building and sailing small boats.
(There are documents that lead us to believe that there would have even been nautical school courses, in the seventeenth and eighteenth centuries, for demanding French and Spanish students).
-Marcellin of 1400/500 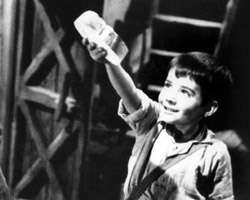 It  was not uncommon for the sacristan (or at least a monk), opening the  church in the morning, to find an anonymous package next to the door  that emitted unmistakable cries.
It didn't happen often, but it was a very busy business!
It was necessary to find awet nurse that would take the first care of it and then find all that was needed to help its growth.
And here there was a need for the intervention of a living parish community to make up for the total lack of public assistance.
By ancient tradition, the Benedictines were not new to raising children offered (oblates) by their parents. Let alone then behind on a newborn there was the unmistakable hand of God!
THE DOORWAY OF THE ABBEY

Here, for a certain period of centuries, the main entrance to the monastery was located.
Probably few people notice that there is a balcony above the front door. Yet this balcony has always been an important element in the Ancient Benedictine Abbeys.
The  fact that currently both the balcony and the underlying entrance door  are set back with respect to the facade of the church, is due to the  lengthening of the body of the church up to the current 42 meters, which took place as early as 1729.
But it is good to know that, when the Olivetan monks arrived, the church of Finalpia was only 15 meters long and that then the presbytery (where the main altar was) was located in the current sacristy. So it was a simple Romanesque church with 3 naves,  with its pointed arches, which in length only reached up to the bell  tower, and this was located on the south side of the facade of the  temple at the time.
Yet, the great Emperor CARLO V (... on whose reign the sun never set ...) and the Supreme Pontiff of Rome CLEMENTE VII came to venerate the Madonna of Pia. 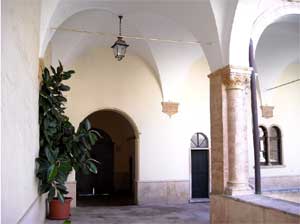 It was the Olivetan monks who extended the church up to 35 meters, after the portico adjacent to the church was completed in 1563 (the date is engraved at the top, on the Last pillar of the portico itself).
The Probandanto rooms had been placed above the portico, from where one could easily access the aforementioned balcony.
Over the centuries, important ecclesiastical personalities have appeared from that balcony to address the crowd, or the various Abbots presented themselves to give urgent notices or to bless the faithful, on the occasion of particular religious celebrations ... 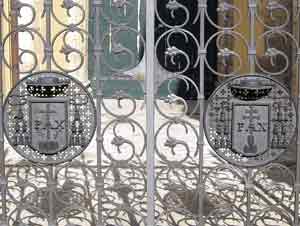 That the current driveway door was  still in use by the 19th century, as the main entrance of the monastery   is reminded to us  by the gate. In fact, on the gates we find two abbey coats of arms in wrought iron with the Benedictine motto PAX (the cross of the left coat of arms is the Latin one, that of the right coat of arms is Lorraine).
The painting of an entrance from other times
The upper arch of the driveway is decorated with a painting that deserves a few words of comment.
It was painted by the Turin painter Thermignon Carlo, active in Liguria with his brother engineer at the end of the 19th century. The historian Don Gregorio Penco said that both had worked from 1896 to 1898 in the abbey church of saint Giuliano of Genoa. 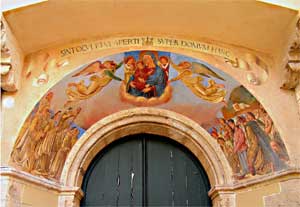 In this painting there are 10 Olivetan monks on  the left with their abbot (the one with the pastoral staff) and on the  right a group of parishioners from Finalpia. The basket with fish  indicates that once the main activity of the population was fishing; the  flag bears the coat of arms of the Marquises Del Carretto (Lords of  Finale for centuries); in the background stands the Caprazoppa  promontory. Both monks and parishioners are turned, in a devout  attitude, towards a reproduction of the miraculous icon of the Virgin of  Pia, painted in the center. Above the painting we read the invocation  to Mary "Sint ocvli tvi aperti svper domvm hanc" (Let your eyes be open to this house).
We have purposely pointed out that the monks represented on the ancient main entrance are Olivetans. In fact, it was this Benedictine family, born in 1313 by the Sienese San Bernardo Tolomei, who founded this abbey towards the end of the 15th century.
Because  of the whiteness of their dress (whose type of fabric - according to an  ancient tradition - was shown to the founder by the Madonna herself,  during an apparition) they are called "white Benedictines".
THE ENTRANCE PORCH OF THE ABBEY
(south side of the first cloister)
Let's now take a look at the access portico, which has now become the south wing of this cloister, in all its extension.
Inside  and on top of the right pillar of this portico (along which the  drainage of the gutters descends) the date (1563) is reported, which  corresponds to the year in which it was finished. 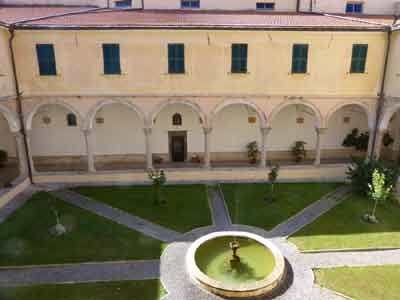 But for us the door in the center of the third arch of this arcade is important. 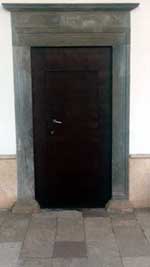 In fact, while on the pediment of this door there is the name of Mary, abbreviated to MRA, in the corresponding internal part there is written 15 JHS 33, that is the famous monogram of the name of Jesus, spread by S. Bernardino of Siena, where JHS is inserted in the middle of the date 1533.
This date tells us that this door was placed by Fra 'Angelo of Albenga during his third priory in Finalpia (1532-34) and that  on the June 5, 1533, during the consecration of the Church made by the bishop of Sebaste, Domenico Grimaldi «de la Crovara». On 6 October of that same year, the visit of the Supreme Pontiff Clement VII took place.
The profile of the roofs up to the bell tower
On the left there is the small pyramid roof surmounted by a cross, (7/8 m wide) which corresponds to the monastic chapel and the underlying sacristy of the church, where in 1533 there was still the
High Altar.
The following roof, up to the height of the third arch of the cloister (where there is the door), was the rest of the primitive church, which was in all 15 meters in lenght.
The bell tower must therefore have risen alone near the facade of the church, facing west. 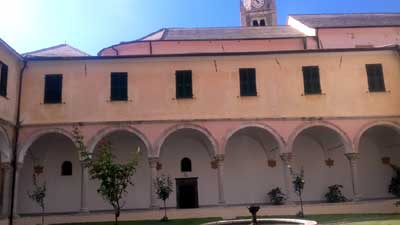 The visit of Charles V to the small Marian shrine of Finalpia was part of the search to consolidate political ties with the Marquis Del Carretto, lords of Finale.
Among the vast imperial possessions there were in fact also the rich Netherlands (Holland), which, however, were not easily accessible from Spain.
Passing through the Atlantic Ocean, one would have to skirt France and England, countries decidedly hostile to Charles V.
By land, it was unthinkable to pass through France.
Less dangerous remained only the Mediterranean.
From here it was possible to reach Milan (a Spanish possession) and then, crossing Austria and Germany, finally reach Holland.
But a safe Ligurian port was needed. 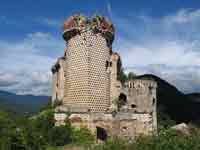 The one of Genoa would have been practicable, but (for various political reasons) not always safe.
The port of Finale, in the hands of the Marquises Del Carretto, was much more reliable.

The Del Carretto family  were notoriously Ghibellines (pro-imperial), so much so that they were
counted among the Electors of the Holy Roman Germanic Empire .
But this understanding needed to be cultivated, even with appropriate contacts.
Like, for example, a devoted visit to the Sanctuary of Finalpia, where in 1477
a new monastery was built, sponsored by the Marquis Galeotto del Carretto,
entrusted to the Congregation of the Olivetan Benedictines, of Monte Oliveto Maggiore (Siena).