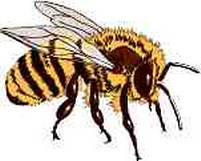 The bee (Apis mellifera) exists on Earth since 30 million years ago, belongs  to the order of the hymenoptera she is an insect that weigh only 0.1 grams, long 12 millimeters, that is endowed with extraordinary ability. First of all, as we know she produces honey a very hard job, sucking the nectar from flowers, and for this reason that, since thousand of years, she is raised by man, often man does not knows of her qualities: to pick up 1 gram of nectar, she must do 50 flights; and to get half kilo of honey, are necessary 7 million hours of flight. The more diffused race in North-Italy is the Ligustica, the most raised in the world. In Center-South  Italy exist some other race, like the Sicula. But the genetic originality of the Ligustica has been lost, because during the years has been interbred with German races and races from East Europe. The only pure alive Ligustica is in Australia imported from Italy.

(The following pages, on the Bee and her world, are taken from a book by Massimo A. Rossi, freely translated).